Postscript: Catching up with Bijan Shoushtari's family a year later 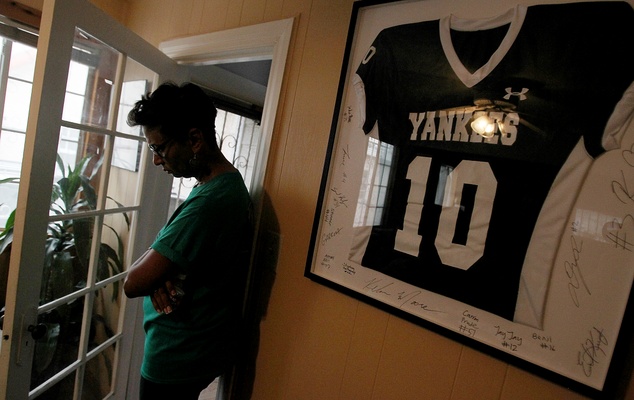 Each time I drive north on Crenshaw Boulevard, near Leimert Park, I think of Bijan Shoushtari, an 18-year-old who was gunned down in the area.

Last year, days after Bijan died, I found myself on his family’s Hyde Park doorstep, wanting to know as much as I could about the teenager.

As I sat at a wooden table near their kitchen, the Shoushtaris, surrounded by family and friends, shared details, big and small, about Bijan. He was a football team captain, an acolyte at church and an aspiring firefighter. He was great at cartwheels, one of his chores was taking out the trash and though he was the youngest child, he served as protector to his sisters Ea, 21, and Samantha, 27.

As I took notes with my left hand, I pinched my leg with my right hand as my throat tightened and tears tried to make their way to my eyes.

This is a two-parent household. Samantha graduated from Loyola-Marymount in 2010. Ea is attending Pepperdine. Bijan's father, Manochehr came to the U.S. from Tehran for college. He and Marsha will celebrate their 31st wedding anniversary in September. They had done everything right. This still happened to them.

In the time since Bijan was killed, more than 530 people have become homicide victims in Los Angeles County. About 74% of them were shot, like Bijan was. About 30% of them were black. Sixty of the victims, 11%, were teenagers. If you look at a map of the killings, most take place where they have taken place for years, in neighborhoods that some Los Angeles residents have never driven through.

On Sunday, I found myself on the doorstep of the Shoushtari home again. It was the anniversary of the shooting – which is unsolved – and I was there to catch up with the family before an evening vigil in  Leimert Park.

The house, like last year, was filled with friends and family. Music played and hugs were exchanged. On the wall, Bijan’s Hamilton High football jersey hangs, with signatures surrounding the number 10. A stack of fliers offering a $50,000 reward sat on the coffee table. They would be passed out that night.

Marsha Jones-Shoushtari, along with her close friends and family, all wore green T-shirts, with “Stop the v10lence, Save lives” on the front. (The 10 in violence stands for Bijan's jersey number.)

In the past year, Marsha has gone to Capitol Hill to talk about her experience. She hopes to start a nonprofit aimed at curbing violence, so there are “no more Bijans,” as she told me.

Starting the movement is difficult because the problems are so deep, her friends and family told me. How do you show someone that life is worth living when they are surrounded by so much death?

Marsha told me that she used to watch television news and feel bad for the mothers and family members grieving on television. But she had no connection to the violence until the unexpected killing of Bijan.

“I was passive, now I want to be aggressive,” she told me.

Now, certain situations give Marsha pause. On Saturday, her daughter, Ea, was at a friend’s house. Ea would have to drive home, Marsha thought, and what if she drives past where Bijan was killed?

“What is to prevent her from being shot tonight,” she wondered.

Robert Holeman, 24, a big-brother figure to Bijan, explained the enduring pain he feels to me. 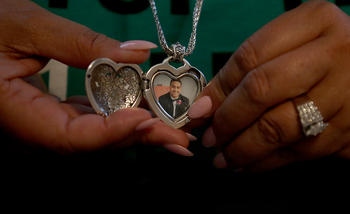 Bijan had been accepted to a fire academy at El Camino College, a profession that would ultimately help other people. Holeman saw Bijan maturing into a man, but that growth was forever stunted.

“It hurt because he never got the chance to grow that much more,” he told me Sunday.

Bijan had just experienced many firsts. He had his first girlfriend, his first trip to prom and he had recently gotten his driver’s license. He had his life ahead of him.

Right now, Marsha told me, he would be finishing up his first year of college. He would be excited about it, so he would take summer school and he would have been working a part-time job.

What stands out is how the experience has turned Bijan’s friends and family – many of whom have never experienced a violent death – into crusaders for peace.  At the vigil Sunday night, about 100 people gathered. Marsha implored the crowd to step up, and get involved.

Friends and family urged people to sign up for their campaign to stop the violence. Friends and teammates of Bijan – bulky teenagers with tears streaming down their faces – recalled why Bijan was special.

Near the end of the vigil, Marsha spoke again. She thanked the people who came out.

“I know my son lived the life of love,” she said.

My heart is so broken and my eyes are filled with tears as I read about this senseless murder, and all of the other murders.

I was born and raised in south L.A, and I have many memories of escaping danger. I am a mother of two, and spent many days worrying about the safety of my children. I worried because I know that NONE of us are exempt from a homicide occurring to ourselves or a family member. It's a shame that we can't enjoy the precious life that God has given us. We have to limit ourselves to where we go, what we wear, how we look at each other and, what is the right or wrong answer if we are approached. We can't walk down a street, ride in a car or stand outside to talk to family or friends without the chance of being murdered! YOU DON'T HAVE THE RIGHT TO TAKE OUR LIVES!!!!

I pray for peace, strength, healing, and resolution to this family, and all of the other families who have lost a loved one. Lord help us!!

"Young Black Men have been dying in these LA streets for decades and rarely do I see such stories about their hopes, dreams, families, etc."

Why would you say that? You do know who was behind the trigger who killed these men right? The dream we all have is the trigger man is caught / killed or sent to prison to stop procreating animals to walk in his footsteps.

This procreation of stupidity/ animals is what has perpetuated the deaths young Black males for decades. It's like a flea you have to stop the cycle of growth

I'm not sure I understand...

I've not noticed any tilt like you describe... I see the LA times write about things they can...

the football player... the policemans son who got shot for not joining gangs... the traveller... the vagrant who cared for dogs... the rapper... Michael Jackson...

it doesn't matter what colour my skin is... I associate myself with those people...

and actually it doesn't matter what colour their skin is... most of the ones I mentioned are black...

the Latino men and black men you mention who don't get a write up... didn't have anything to write up... dude dropped out of school, joined a gang, menaced people for a bit, got shot, no one saw anything, no one admits to anything and sends us to God for judgment... that's not much of a story...

the people dying in the streets are nothing like you... you are a respectable human being with values we can all relate to... you can have purple skin for all I care...

read the stories of the people we are similar to... instead of wishing the Latino and black men killing each other for some stupid reasons had write ups about their college days...

they signed that away the day they threw up a gang sign...

I'm just wondering why someone's name has to be Xi Jung or Bijan Shoushtari in order for the LA Times to pen heart-felt, background, victim pieces. Young Black Men have been dying in these LA streets for decades and rarely do I see such stories about their hopes, dreams, families, etc. Wake up LA Times, Black and Latino victims are being disproportionately slaughtered out here and all you do is write about those who aren't characteristically seen as the "usual" lamb (victim). The story you pass along is that our lives aren't nearly as important, or our back stories are never interesting enough to write about (I.e. no loving family, no college hopefuls, no bright futures or 2 parent homes). Yes, I understand our demographics may not be colorful but if you look hard enough I'm sure there are stories there that will satisfy your readers. Please, lets stop sending a message to Black and Latino readers that says you're not interesting enough to write about, even if you are dying at disproportionate rates in Los Angeles. Thank you,

Please come out to remember those lost, and bring awareness to the staggering number of youth being killed in Los Angeles and surrounding cities. We will have resources to help reach the gangs or youth in attendance. This Saturday 8-9-2014 at Leimert Park Los Angeles. Prayer and ministry will begin at 2pm, but this will be an all day gathering in the park. ENOUGH IS ENOUGH!! Wear all white and bring memorials of lost loved ones. Also candles to light at sundown. Please contact me if you have further questions or want to speak on behalf of your loved one.
Adiya
323-519-2973
Blessings

Was the dude a gang banger ?

I've been closely watching the events especially in this case. Now 42, I was a victim of an attempted murder on Slauson and Crenshaw, approx. 15 years ago, everyday I relive the horror and terror of how whom ever it was that tried to take my life. Me and my friends just pulled up to that liquor store right there pass Crenshaw, we got out the car and then the bullets just started flying, and for what we didn't even know. some dudes just asked where we was from and we didn't respond assuming that was the best course of action considering where we was. I took 6- 9mm bullets and im still here tell write this and tell my story. All I could think was why as the bullets was flying why I couldn't understand, my point is there are some full time killers out there that specifically targets Crenshaw. I"d have to say that Crenshaw is a death bed for young black males. I hope the family of Bijan Shoustari will read this. I send my condolences and prayers. The ignorance and the no respect for life is what gets to me. Young black males being shot down and murdered like its ok. What do we do? how do we solve this? why is this a problem.