Family, friends gather to remember teen whose 2013 killing is unsolved 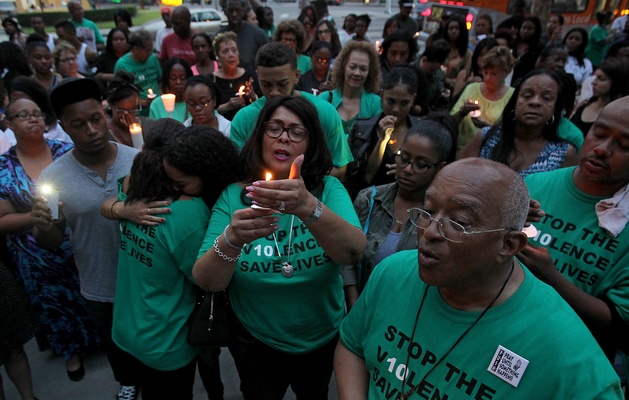 Friends and family of an 18-year-old boy gunned down in Hyde Park a year ago held a vigil on the anniversary of his shooting Sunday, as police continue searching for his killer.

Bijan Shoushtari was shot to death while riding in a car on Crenshaw Boulevard shortly after midnight on Aug. 3, 2013. The shots were fired from a car that pulled up alongside the white 1973 Buick Electra in which Shoushtari was riding. No one else in the car was hurt.

“You just wonder why,” his mother, Marsha Jones-Shoushtari, said Sunday.

“But the most pressing question is, I just want to know who did it.”

Shoushtari had just graduated from Hamilton High, where he was a football player. He had plans to go to college and wanted to be an emergency medical technician, then eventually a firefighter.

“If the people who shot him knew him, they wouldn't have shot him,” said Mark Jones, the young man’s uncle and a local pastor.

About 100 people gathered Sunday evening at Leimert Park. They held candles and photos of Shoushtari and wore green shirts with a photo of him on the back. As some in the crowd wept, speakers called for an end to senseless violence.

“If you know someone who knows someone who did this heinous crime, please, please call someone,” Jones-Shoushtari said.

In an interview before the vigil, his mother said that before his death, she would see news reports of Los Angeles killings and never imagined something similar happening to her family. When the doctors pronounced her son dead two days after the shooting, she thought of the mothers she had seen grieving on the television.

“I felt horrible because I never did anything about it,” she said.

The killing has led friends and family to start a campaign called “Stop the violence, save lives” aimed at curbing violence.

“This is a way of life for us now,” Jones-Shoushtari said.

Her family has learned to cope. Her husband, Manochehr, is sometimes angry, and he is very protective of his 21-year-old daughter, Ea, who attends Pepperdine University.

Ea and older sister Samantha, 27, recently got tattoos of their brother’s name in Farsi as a remembrance.

For Samantha, the passage of time has allowed her to more fully accept her brother's death.

“When I look at his pictures now, I smile,” she said. “Before it was hard.”

Jones-Shoushtari said she received a phone call from the Los Angeles Unified School District recently. The caller told her that the district was polling recent graduates to track their progress and wanted to know what Bijan was up to.

She told the woman that her son had been killed but added that if he were alive, he would have been finishing his first year of college, working a part-time job and taking summer school classes.

Los Angeles police detectives say they have no leads or motives in the case. A $50,000 reward has been offered.

Anyone with information on this case can call the LAPD’s Criminal Gang Homicide Division at (213) 485-4341.

Photo: Marsha Jones-Shoushtari, the mother, Bijan Shoushtari, holds a candlelight vigil for her son at Leimert Park on Sunday, Aug. 3.  Bijan, 18, was a football team captain at Hamilton High School. He died a year ago, but his case remains unsolved. Credit: Luis Sinco, Los Angeles Times