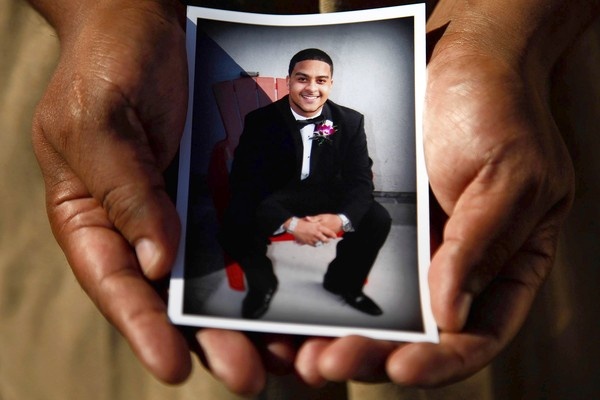 They arrived at Cedars-Sinai as soon as word spread: Bijan Shoushtari, 18, had been shot while traveling in a car on Crenshaw Boulevard.

They came to help: family members and distant relatives, his parents' bosses and co-workers, friends of his sisters whom the family hadn't seen in years. There they were, all packed in the hospital's intensive care unit, praying for the young man who'd graduated from Hamilton High in May.

His mother, Marsha Jones-Shoushtari, kept thinking about her son's plan to become a paramedic and eventually a firefighter.

Once he healed, she thought, her college-bound son would be able to use the shooting as a way to comfort others in the ambulance. Look, he'd say, I got through this too. He might even show his scars.

Shoushtari, who was a donor, had lost a tremendous amount of blood. People began donating blood to replenish the hospital's supply.

His sister Samantha, 26, took photos of all the well-wishers for an album she planned to give Shoushtari when he woke up.

There's no indication that he would have been a direct target."

But it was not enough. Shoushtari died two days after he was shot Aug. 3 while riding in a 1973 white Buick Electra with two friends.

Detectives are evaluating evidence, retracing the men's steps and seeking more witnesses in the shooting, which could be a case of mistaken identity, said LAPD Det. Supervisor Sal LaBarbera.

"There's no indication that he would have been a direct target," LaBarbera said.

At the stucco South L.A. home where Shoushtari and his two sisters were raised, an uncle, Pastor Mark Jones, stood in Shoushtari's room. A football team photo was taped above the young man's bed.

"This is the only instance of trouble I can think of in his life, period," Jones said.

Fanahi Williams, his kindergarten teacher at Community Magnet Charter, remembers Shoushtari as the kid who always raised his hand. He had a stutter that came out when he was excited. But it didn't make him shy.

"He participated all the time," Williams said.

Taylor Salisbury, 18, his longtime best friend, said Shoushtari's house phone number was the first he memorized, besides his own.

The two were inseparable since elementary school. When Salisbury suffered an injury last year and was out of school for weeks, Shoushtari visited his home with Del Taco and homework in hand.

"I don't think I've gone a day without talking to him," Salisbury said.

His football coach, Kelvin King, said Shoushtari played various positions during his four years at Hamilton High. As team captain, he'd give pep talks in front of the entire team.

"He was one of the smaller ones … but he had the biggest heart," he said.

The void he leaves in his close-knit family will be underscored in countless everyday moments. His sisters Ea, 20, and Samantha won't have their overprotective little brother asking them where they're going. His mother will look at the overflowing trash can and be reminded — that was his chore. His father, Manochehr, won't have Shoushtari asking him for money to take his girlfriend on dates.

But their community will also feel a gap.

People at Westminster Presbyterian Church will miss the acolyte with the big smile on the first Sunday of every month, the teenager who willingly helped the elderly in and out of their cars.

"He would help before he did anything else, and that's unusual for a young man," said Pamela Thigpen, a longtime church member.

For Shoushtari's parents, the thought of his being taken away so swiftly and tragically never crossed their mind.

Mike Feldmar, Jones-Shoushtari's boss of 29 years, watched Shoushtari grow up. He said the loss is "devastating."

"You hear about these things happening all the time," he said. "Until you experience it with somebody you know, it makes you see how terrible this kind of thing really is."

Joyce:
The Homicide Report recorded 595 homicides in Los Angeles County in 2013, the year Bijan Shoushtari was killed. So far in 2014, we have recorded 83. You can filter homicides by year, neighborhood and other factors. Start here: http://homicide.latimes.com/year/2013.

This scene will keep repeating until stop and frisk is a fact of life in troubled areas and gang members are locked up for being gang members. This is no way to live and something has to change.

Praying that the Creator heals the family and loved ones and that this beautiful boy's spirit inhabits our hearts and compels us to work towards peace. May God bless and free his soul.

Wow, I was at Cedars that day and I'd never seen so many people there for one patient. There must have been 25-30 people in the waiting room. I was thinking how loved the person must have been. So sorry for his family and friends.