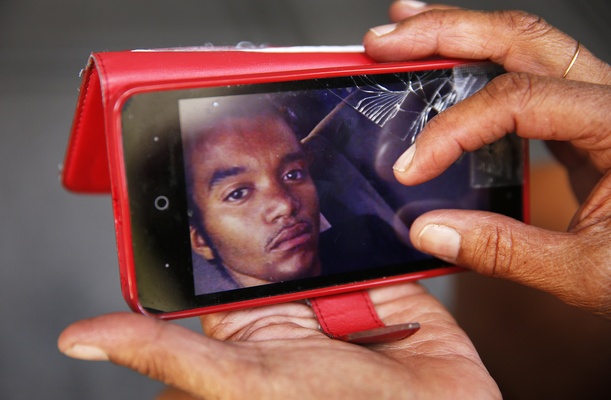 Two gang members were convicted Monday in the shooting death of Tavin Price, a 19-year-old who was killed in front of his mother in the parking lot of a Hyde Park car wash last year.

As the verdict was read, Johnson dropped his head and looked away from his attorney. Johns smirked and began to remove his tie and dress shirt.

“Johns has been making that face since the arraignment,” Jennifer Rivers, Price’s mother, said after the verdict. “He has no remorse. Let’s see if he makes that face after some years in jail.”

The two men are scheduled to be sentenced Nov. 30. They face 50 years to life in state prison.

A third man, Dwight Kevin Smith, 31, pleaded guilty to one count of manslaughter as part of a deal to testify against Johns and Johnson. Smith faces a sentence of 12 years in state prison.

In closing arguments Friday, Deputy Dist. Atty. Bobby Zoumberakis said Johns and Johnson, members of a Crips gang, shot Price on May 29, 2015, because he was wearing red shoes, a color associated with the rival Bloods gang.

Smith and Johnson were at a smoke shop near the car wash in the 3300 block of West Florence Avenue when Price entered with a family friend. Smith confronted Price about his shoes while Johnson smoked a cigarette. The friend explained that Price, who remained silent, had a mental disability and was not a gang member, Zoumberakis said. Price suffered brain damage in a car accident when he was 3 and did not belong to any gang, his family said.

Price and the friend left the shop, according to evidence presented at trial, and Johnson said he was going to get a gun because he thought Price was a Bloods gang member.

About 10 minutes later, surveillance cameras recorded Johnson across the street in a black Lexus sedan with Johns nearby; Smith stood near the smoke shop. Johns then crossed the street and entered the alley to the car wash, where Price was. The footage played in court showed Johns approaching Price and firing four times into his back.

The prosecutor called 25 witnesses to piece together the events of the shooting and detail the mens’ gang involvement. Several witnesses from the scene were unresponsive on the witness stand, though they previously identified Johns as the shooter during recorded interviews presented at trial. One witness said Johns had told her to keep quiet, and another recognized several gang members in the courtroom audience.

Smith testified that he only hassled Price because he didn’t want anything to happen to him. When he learned that Johns planned to kill the teen, he said he tried to intervene.

“I told ‘Bone’ [Johns’ gang name] that he should make ‘Bang’ [Johnson’s gang name] go kill him. I didn’t think ‘Bone’ should have been caught up in it,” Smith testified.

Smith also said he was attacked twice while in prison -- once by Johns and another time by group of men -- after he agreed to testify. Although he knew that snitching could open him up to violence for the rest of his life, he said he couldn’t sleep knowing the killer was still free.

Defense attorneys Curt Leftwich and Bill Jacobson spent of the most their efforts trying to discredit Smith, and they focused their cross-examination on him. Neither attorney called a witness to build a defense.

Leftwich argued that his client, Johnson, was not involved in the shooting and was only around because he was getting his car fixed in the area. Leftwich also said Smith ordered Johns to shoot Price. Zoumberakis, however, pointed to a transcript from a police interview with Johnson in which he said that Smith did not have the authority to order a killing.

And the prosecutor said jurors should not base the case entirely on Smith’s testimony.

“You should be skeptical of Dwight Smith. He’s not the type of person you want to have come watch your kids,” Zoumberakis said. “But his testimony only gives you details to the other evidence. He is just the cherry on top.”

"He has no remorse". Killers rarely do have remorse so why saddle the taxpayers with the $40K per year it costs to house them for life and provide free everything instead of a quick trip to the needle?

Hi i live in Western Australia and i cant believe someone can be killed for the colour of there shoes!I have visited your country multiple times and love all of you people but this staggers me.I do not care if your black,white or another colour you guys just need to look after each other just STOP killing each other for Gods sake,think of the hurt families have when this shit happens!I love the USA and will hopefully return to your great country for a holiday.This just makes me sad.