Prevalence of gang colors fades, but they can still be deadly 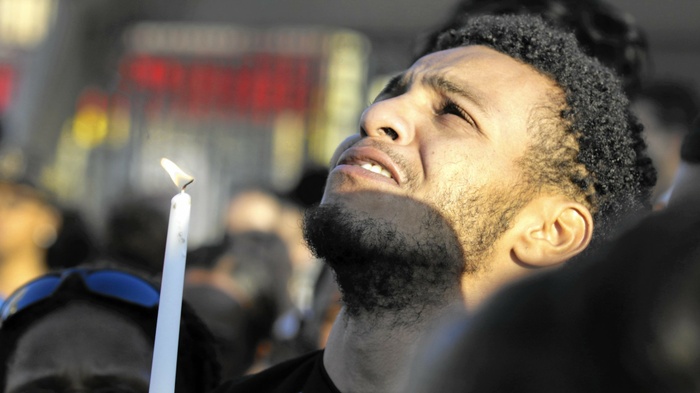 Melvin Farmer remembers the days when Bloods and Crips openly flashed their colors. Gang members wore an evolving uniform; bandannas, T-shirts, shoes and even earrings to signal their affiliation. But Farmer, a former Crip who is now a gang intervention worker, said that for many years colors remained the key distinction.

Today, colors, so tied to gang affiliations in popular culture, are rarely at the root of street conflict. As authorities cracked down on gangs with injunctions and other new tools, the culture has become less overt.

"If you dressed in gang attire with the colors, it was pretty much a red flag for officers," said LAPD Det. Chris Barling, who has been working homicides in South Los Angeles for more than 20 years. "Gang members don't wear their colors in public anymore, so those colors don't tell as much about the individual."

This is what made the killing of 19-year-old Tavin Price stand out. Price went to a carwash in Hyde Park with his mother May 29 when a man hassled Price over his shoes: red Chuck Taylors. Police believe that the color of the shoes may have played a role in the shooting.

Price, who had a mental disability, left the man and returned to his mother. The man followed and demanded that Price take off the shoes. When he did not comply, the man opened fire and fatally shot Price, who was rushed to a hospital where he died in surgery.

"He was not a gang-banger. He did not hang out with anyone in a gang. He never did anything to even be remotely associated with that lifestyle," said Jennifer Rivers, Price's mother.

The fatal shooting was the sixth within a one-mile radius in the last year, according to recent coroner's data. The carwash is also on the dividing line between two rival gangs, Farmer said.

"It's about where you're from," Farmer said. "Crips and Bloods could be in the same area, but if someone wanders outside of their area, then they risk getting killed."

Three days after Price was killed, a 51-year old man was shot to death two miles away in Manchester Square.

Police say that Carl Betts and another person were sitting in a sedan when a dark-colored car pulled up and a person inside muttered what some would say are the most dangerous words in the county: "Where you from?"

The gunman opened fire, striking Betts, who was pronounced dead at the scene.

In the 77th Street Division, where Price and Betts were killed, the number of reported shooting victims is up by nearly 20 incidents over the same period last year. Most of the shootings involve gangs.

Wes McBride, the executive director of the California Gang Investigators Assn., said that gang crime is cyclical. After years of historic lows in crime, some areas are seeing a rise in gang shootings.

We don't include the race/ethnicity of the victim and suspect to make people or neighborhoods look bad, but to give the most accurate picture of who is being killed in Los Angeles County. Race and ethnicity are stark predictors of homicide risk.

Here's more information on why we choose to do this:
http://homicide.latimes.com/about/#race

The homicide report include the race of the victim and suspects because it happens mostly in the black or Hispanic neighborhood to make black and brown people look bad it's like they report all negative incidents nothing positive.

This stuff is stupid. I live in Seattle. Sometimes I venture into Rainier Valley, which has some gang activity. I stopped wearing my red baseball cap because young black men were casing me, and not in a friendly way either. Damn shame what has happened to our people.

Yes Sports Caps,Jerseys.ect. still exist but members aren't venturing out flossing in rival gangs turfs..The rules have change crips kill crips blood kills blood so colors (blue)doesn't stop a crip from getting at crips same holds true for bloods(red)...What's changed now ? The predator will stalk his prey by going to rivals hoods and pulling up on anyone in that area assuming there sympathizers or gang members from tha area..And because they look like me black, act like me,could be me,they blend in like part of the community until they pull up on you and ask the dreaded question WHERE YOU FROM? NATION BEWARE BLACKS ARE OUT TO KILL BLACKS ALSO.. NOT JUST POLICE. "PEACE IN THE STREETZ"
ONE LOVE ONE LIFE
MEL FARMER

Stick to one commenting format, idiotic LA Times! You're censorship is appalling.

I mourn for California. I live in New York, and wear Lycra outfits while out exercising. What colors I wear are for visibility on the road. My helmet is read so as to come up mirrors more easily and the arm attire is usually white, red, or grey, so as to signal better. I've actually had a black little kid mutter, 'look he's wearing blue and red.' That was in the Bronx, my former neighborhood. Somewhere in Manhattan, an older black man commented,'let him try that in East New York.' OK, thanks for the tip. Looks like black lives don't matter after all. Stop acting like crabs in a barrel, stop having kids that you cannot afford (I don't have any), stop with the macho BS. I could go on with practical advice, but little would come of it. Over all the many years of 'Stop and Frisk', I was never stopped on the street, why? I have as much melanin as the next light-skinned black guy. I simply look, dress, and speak like a grown and educated man. Maybe if I were a driver, I would be hassled more, but there's ways to protect oneself there as well. Learn or think about what those are. Yes, police do abuse their power and shoot black men much more easily, but why come up on their radar after all?

Sad to see the two murders mentioned above, but the fact that Bloods, Crips and other gangs are less likely to sport colors is a good sign that the cops (and gang intervention workers) are making progress.

The movie "Colors", and others like it were accountable in spreading the L.A.’s gang culture to different areas of the country. This was well represented in HBO's documentary "Gang Bangin' in Little Rock", a 1994 HBO documentary about street gangs in Little Rock, AR

Mr.Campbell,ur only partly right n your article about gang colors.I tweeted earlier this wk abt youngster not trippin over colors anymore.well that's not entirely true. The gangs now for the most part bang the colors and logos of what sports team most closely identifies with there gang and it really doesn't make much of a difference red or blue crip or blood.plenty of crips wear red and vice versa. Although red and blue r still traditional colors. Its almost like each gang though still bloods or crips have individual uniforms for each and every gang set....