Mother of slain 19-year-old: 'Every day they go to court, I'll be there' 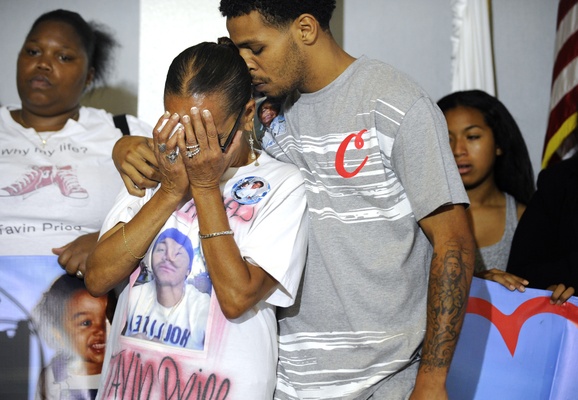 Murder charges have been filed against three alleged gang members accused of killing a 19-year-old in South L.A. over his red shoes, police said Tuesday.

Dwight Smith, 30, and Kevin Johnson, 25, were arrested last week on suspicion of murder, said LAPD Det. Chris Barling. Murder charges were filed Friday against the two, and an additional charge was filed against 27-year-old Kanasho Johns.

Johns was taken into custody Tuesday in Texas on a murder warrant, Barling said. Antheyst Jarrett, 27, who was arrested the day of the killing, is also facing charges of witness intimidation and conspiracy to commit murder in connection with the shooting.

Tavin Price was at a car wash in the 3000 block of West Florence Avenue on May 29 about 11 a.m. when he went to a nearby smoke shop to buy a soda, according to authorities.

Inside the shop, he was confronted by two men who asked about his gang affiliation because of his red shoes. 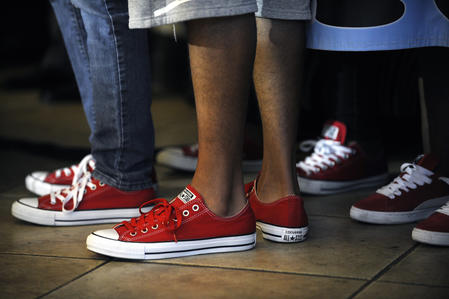 Police said Price, who had a mental disability from a car accident as a child, ignored the men and walked back to his mother and a family friend who were finishing up at the car wash.

As Price stood in front of his mother, he was shot, police said. On Tuesday, as investigators announced the suspects' names at a news conference, Price's mother wept.

Jennifer Rivers told reporters that she goes to the Inglewood Park Cemetery each day to visit her son's grave. She said she still hears in her mind her wounded son asking her if he’s going to make it.

“He didn’t deserve to be murdered right in front of my face,” she said.

Rivers and other family members wore red shoes in memory of Price. Rivers said she is prepared for the upcoming judicial process.

A $50,000 reward was introduced last week in Price's killing and is expected to be voted on Wednesday. City Councilman Bernard C. Parks said he hopes the money will inspire more witnesses to come forward and bring justice to the family.

"Nothing brings closure when you lose a loved one," Parks said.

Officials at the news conference emphasized the heinous nature of the crime. “When these types of acts are committed, justice will prevail,” LAPD Deputy Chief Bill Scott said. “We have a lot of work to do, but we are pleased to have these young men in custody.”

Marilyn Cedeno, Price’s godmother, said she would like to start a nonprofit for children called “Why my red shoes” in the wake of Price’s death.

“His death will make a difference," she said after the news conference. Cedeno described Price as a “sweet soul.”

“The only thing he asked for his whole life was to be loved and a white picket fence,” she said.

Rivers went to the cemetery after the news conference to tell her son about the arrests and murder charges. She has placed a small white fence at his grave site as she waits for the headstone to be made.

I too, thought those days were behind us. but every time the budgets are cut for youth and recreational services in South LA, and there is a release in low level offenders this always happens. Keep in mind that 11th and Florence is on the border of another police jurisdiction, Inglewood. In front of Mom? This is truly tragic. How much will the body count be this time until something is done. Yes--it is nice to have a moment in LA City Council and the State House to commemorate Tevin Price. But until Legislators stop cutting funding to effective Youth programs at the expense of other fragile populations in South LA- the body count will cycle through again and again. And those who make money as always, by any means necessary off the backs of our community just wait patiently until the legal loopholes, funding cuts, and loitering youth are there to set up business and deal in death with acceptable collateral damage in one innocent Tevin Price.

Sad that u can't even wear what you want anymore. A bunch of grown men attacking a 19 year old over some shoes but then he wears the same colors. That was a coward and sissy act.

How much more senseless can these killings get. With gang charges these guys should never see the light of day again.