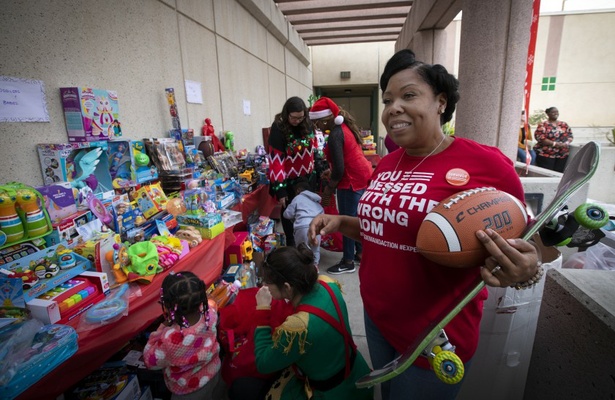 The holiday season is particularly rough for Nicole Williams.

Her 27-year-old son, Antonio “Tony” Wilson, was shot on the street after leaving a shopping center in South Los Angeles in November 2017.

Williams spent that Thanksgiving by his bedside, praying for his survival. By Christmas, he was dead, leaving his mother to question her faith in God. Police do not believe Wilson was a gang member and no arrests have been made in his killing.

Since her son's death, Williams has become involved in anti-gun violence efforts and has found solace in the community of others who are grieving.

On Saturday afternoon, Williams joined activist organizations Moms Demand Action and the Movement of Mourning Mothers Assn. in throwing a holiday party at the Los Angeles Police Department's 77th Street Station for children who have lost a parent or another loved one to violence. It's her way of coping.

“I know it’s difficult,” Williams said of victims’ families struggling through the holidays. “It’s difficult for me.”

Dozens of children gathered in the station’s courtyard to decorate ornaments and assemble paper reindeer while listening to Christmas music. Families posed for Polaroid photos against a snowy backdrop while some of the kids played tag.

Keisha Evans brought her two sons, ages 10 and 14. Their father, Calvin Williams, was standing in an alley visiting with a friend when he was shot and killed in 2014 in the Green Meadows neighborhood of South Los Angeles.

Evans said her children miss their father and always talk about him. Her job is to keep them busy with activities.

“Christmas can really be one of the hardest times,” she said while watching her kids play.

After a parent or grandparent is killed, the children are often silent witnesses to the adults’ grief, survivors say. Sometimes they will suffer from depression or post-traumatic stress disorder.

Tameco Brewster, founder of the Movement of Mourning Mothers Assn. and who helped plan Saturday’s event, said her daughter, Emani McAllister, now 14, is still suffering from the death of her brother nearly nine years ago.

D'nary Fowler, 19, was shot by Los Angeles police when they confronted him during the commission of an armed robbery in January 2011, police said.

Emani hung out with the other children at the craft tables, and found comfort in knowing they were living a shared experience.

“They’re all here for a reason,” Emani said.

Recently, a friend of hers, Erin Lavendar, 19, was one of two people shot and killed while attending a memorial in Carson for another friend.

“It’s too common,” Emani said of the deaths. “What gives people the motive to do that?”

Tina Easley buried her son, Travon Brown Jr., 21, three days before Christmas in 2017. This will be the first Christmas she’ll celebrate since he was killed. Brown was shot when he got into an argument with someone on the Metro Blue Line train platform in Compton.

Easley said she tries to stay positive by keeping busy and participating in healing events like Saturday’s party.

“It’s beautiful to see the other mothers,” she said. Easley brought her two granddaughters, who still ask about their uncle.

Williams brought her young grandson from Las Vegas for Saturday’s event, where he sang Christmas carols and played with the other children. She said she tries to help other mothers and families deal with their loss by talking with them.

Meanwhile, she still holds out hope for an arrest in her son’s case.

Last year, police held a news conference to publicize a $50,000 reward for information leading to the arrest and conviction of her son’s killer.

Though details are sketchy, detectives said a white BMW had pulled up close to Wilson near the intersection of West 43rd Street and Vermont Avenue. A gunman inside the vehicle fired on him.

LAPD Det. Nellie Knight said she has found no evidence that Wilson was in a gang. It’s unknown what the shooter’s motivation was or who the person was trying to target.

Williams said she plans to continue helping other victims’ families cope with their grief.

“We don’t have no choice but to live,” she said. “What else would we have to do?”