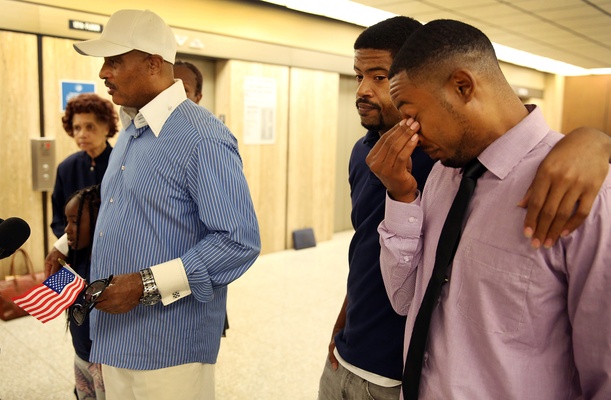 A man convicted of shooting and killing a 5-year-old boy in his Spider-Man costume on Halloween in 2010 entered a courtroom Tuesday morning with his eyes toward the floor.

It had been almost two months since a jury found Leonard Hall, a 26-year-old black man, guilty of second-degree murder in the killing of Aaron Shannon Jr. Los Angeles County Superior Court Judge Robert J. Perry, would soon hand down the sentence.

Hall’s family filled several rows in the downtown Los Angeles courtroom. On a small bench in the back of the room, William Shannon, Aaron Jr.’s grandfather, bounced his legs in anticipation of the statement he would give the court.

He had waited nearly five years to address the man convicted of his grandson’s death. He did not write anything down, but made some notes in case he was overtaken by emotion.

Los Angeles County Deputy Dist. Atty. Sarika Kim said during the trial that Hall and Marcus Denson, 23, were members of the Kitchen Crips gang and went into rival gang territory on Oct. 31, 2010.

Aaron Jr. was playing in his backyard on 84th Street in Florence when the two men walked through a nearby alley and Hall opened fire. A bullet struck struck Aaron in the head. He died at the hospital the next day. The boy’s uncle and grandfather were also wounded in the shooting.

Two previous juries had been unable to reach a unanimous verdict in trials to determine whether Hall was the gunman. Denson previously admitted his role in the attack and was sentenced to nearly 25 years in prison. He testified that Hall was the shooter.

Before Aaron Shannon’s family spoke to the judge, Hall made an impassioned plea to represent himself. He also proposed a motion for a continuance to prepare his own case. But the judge denied the motion.

"We're going to sentence you today, sir," he said.

Ojo filed a motion for a retrial on the grounds that she was not allowed to present an eyewitness account expert to discredit testimonies which identified Hall as the gunman. The judge ruled against the motion. All of her concerns would be addressed in an appellate court, Perry said.

“I think it’s very sad in 2015 to get a conviction on this information,” Ojo said in court. “The information was unreliable and we’ve seen studies which discredit witness testimonies. And there was no hard evidence which identified my client as the gunman.”

Aaron Shannon Sr., the boy's father, sat alongside his family as the lawyers and judge discussed the motions. He fumbled with the cuff of his shirt and adjusted his tie several times before he was called to give a final statement.

“For five years, I have suffered a great loss. Our family has suffered a lot.” Shannon Sr. said. “I’m glad justice has finally been brought to my family.”

William Shannon approached the podium with even strides when he was called, but wavered before he began.

“Words don’t come easy for me when I have to speak about Halloween 2010 or the following day,” William Shannon said. He choked on the next words and stopped. He took a breath and started again.

“He was 5 years old and 3 months, One thousand nine hundred and eleven days to be exact. That’s all he got.”

In his final remarks, Shannon gave a few words for Hall: “I wish him well.”

Then the judge began to read the sentence. A flurry of penalties and numbers came in rapid succession. Fifteen years to life. Nine years with gang enhancement. Forty-four years for count two. Each penalty stacked on top of the next.

Hall's face turned a dark red as his struggled to maintain a straight face. Ojo tried to meet his eyes but he focused on the empty space behind the witness stand. His family sat upright with blank faces. The Shannon family looked toward the floor. Both groups silently left the courtroom.

After the hearing, William Shannon held the hand of his only 7-year-old grandchild, Riley. The young girl smiled and skipped around, unencumbered by the proceedings.

Shannon chuckled and held her by his side.