A witness to his 5-year-old grandson's shooting on Halloween, grandfather awaits verdict

They’ve seen each other in these hallways many times. But in the silent corridor outside the 9th-floor courtroom in downtown Los Angeles, William Shannon and Deborah Mosby don’t speak to each other. At times, the only sound is a faint buzz from the lights overhead.

“I have nothing to say to him,” said Mosby, 62, eating a bag of cherries and rolling the pits through her fingers.

Shannon, 60, looked at her with compassionate, tired eyes. Soon he would take the stand for a third time against Mosby’s son, Leonard Hall Jr., who is charged with murder in the shooting death of Shannon’s 5-year-old grandson.

Two juries have deadlocked in the case, unable to reach a verdict. The arguments and the evidence have not changed much. Neither have the memories. Nor the faces in the courthouse.

“I don’t feel any ill feelings towards her,” Shannon said of Mosby. “She didn’t do anything wrong, but I know she would never want to speak to me.”

The divide is clear. Shannon already has testified twice that Hall was the man he saw shoot his grandson.

On May 8, the trial was in its fourth hour and opening statements were over when LAPD Det. Eric Crosson told Shannon it was time to again tell the court what he witnessed. Shannon chuckled painfully: “Let’s go put on a show for them.”

On Halloween nearly five years ago, Aaron Shannon Jr. flexed his muscles in his Spider-Man costume. The 5-year-old bolted around his backyard on 84th Street in Florence, shooting imaginary webs at his grandfather, father and uncle. The young boy stumbled, but Shannon put him back on his feet. Nothing could hurt Spider-Man, he said.

A few moments later, according to Shannon, two men crossed through the alley behind the house. Shannon gave them a nod. Neither returned the gesture. In the moment he turned his back, shots rang out. He turned around to find a man firing a gun.

The following moments registered like photos in his mind. The look of the man with the gun. His grandson's blood on the pavement. The way Aaron’s eyes rolled back in his head as his family tried to resuscitate him.

Aaron was pronounced dead at a hospital the following day, Nov. 1, 2010.

Marcus Denson was arrested four days after the shooting. He admitted a role in the attack, accepted a plea deal and was sentenced to nearly 25 years. He testified in all three trials that Hall shot Aaron.

The prosecution’s case relies on witnesses who say Hall was the gunman who ran from the scene. Prosecutors said the two assailants were members of the Kitchen Crips and sought to retaliate against a rival gang when they spotted the family and opened fire.

Carol Ojo, the lawyer defending Hall, says the prosecution’s case doesn’t account for witnesses who say there was a third person at the scene.

Jury deliberations began Tuesday, and a verdict is expected today.

Shannon swiveled side to side in the chair on the witness stand on the first day of the trial. His cross-examination would begin later in the day and continue into the following Monday. When his eyes traveled across the room to where Hall sat, he immediately turned and looked at his feet.

Los Angeles County Deputy Dist. Atty. Sarika Kim took Shannon through each moment of the shooting, projecting crime scene photos in the courtroom. After each of Shannon’s calm responses, Kim's look became pained as she prepared to dig deeper into Shannon’s memories.

On the screen was a photo showing Aaron’s blood on the pavement -- a dried spot between two trash cans. The court reporter froze and looked into Shannon’s eyes. Shannon grimaced, gave her a comforting wink, then looked at the screen.

“That’s my grandson’s blood on the ground," he said.

Kim put up two other images. “And what is this?”

“That’s the interior of the back porch where my sons carried Aaron Jr. to the bathroom,” Shannon said, using a laser pointer to locate a trail of blood.

Kim took three slow steps away from Shannon before asking about the next photo. The courtroom fell silent.

“That’s the bathroom where we tried to resuscitate him.” Shannon said, struggling.

Strips of Aaron’s Spider-Man costume are mingled with blood on the linoleum floor.

Shannon gripped his shoulders in a hug as he gathered himself. “My mother and my son were kneeling over him. They were trying to make him comfortable. I felt helpless. I didn’t really say anything. I just stared at the ground and tried to zone away from the moment.”

Ojo, Hall’s defense attorney, was not so tender in her questioning.

When she began to cross-examine Shannon, he sat up in the chair and looked her in the eye.

She asked if he had seen himself on the television news conference about his grandson’s death.

“You mean to tell me that you never wanted to see how you looked on TV?” Ojo asked.

“I know what I look like. I’ve seen myself in the mirror for 60 years,” he said.

Neither Ojo nor the jury could resist a brief chuckle.

“I feel for him. I really do,” Ojo said outside court. “But I don’t believe the prosecution's evidence is strong enough to put away my client. If the jury does not find Leonard guilty, I hope he finds some peace. He’s been through the trials for a while.”

At the end of the first day of testimony, Shannon wished Ojo a good day as she passed him near the elevators.

“I know it’s her job to defend her client,” he said. “Somebody has to do it.” 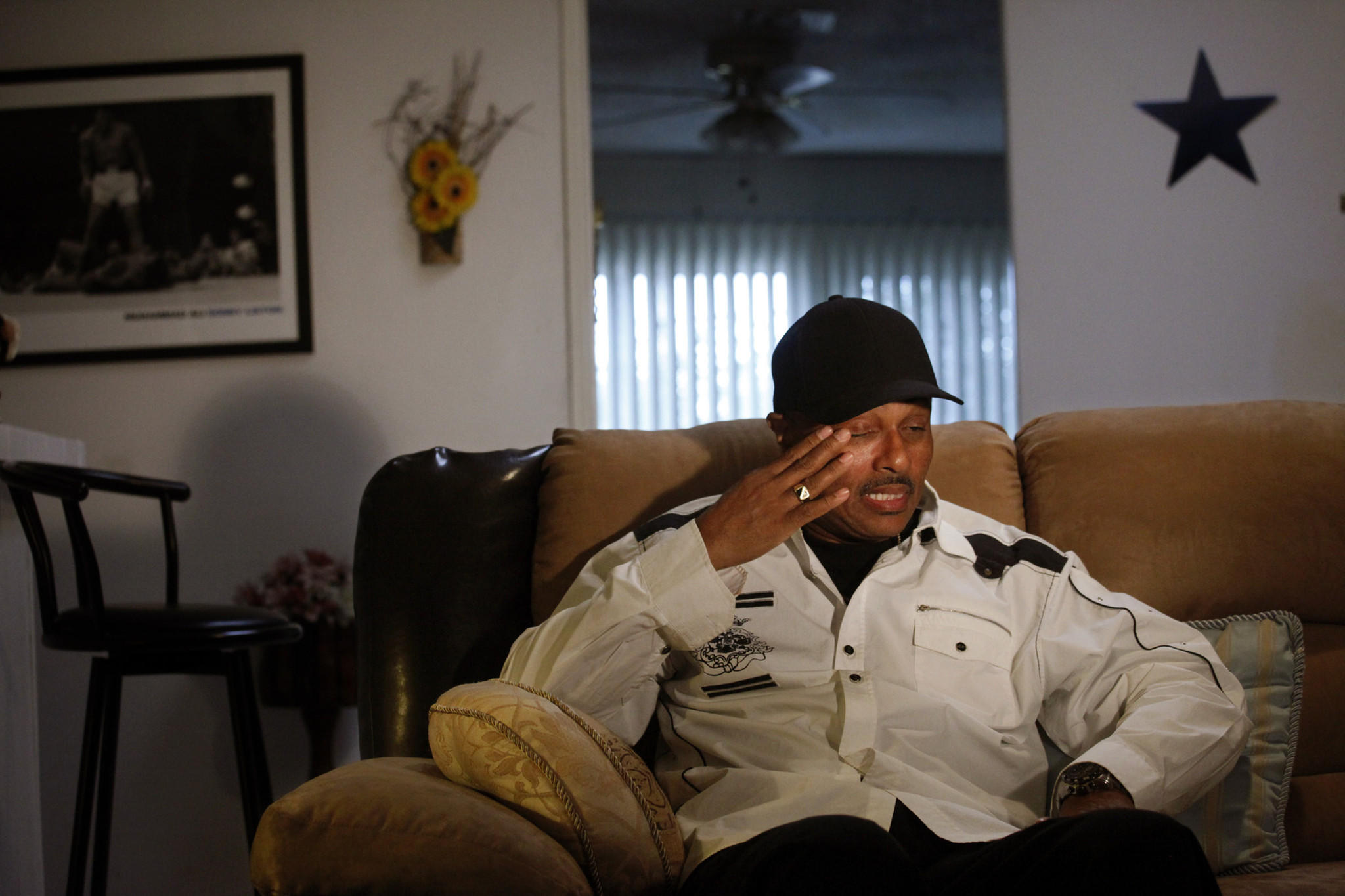 Most days, Shannon leaves the courthouse and works his way through his routine. He checks his P.O. box. He takes dinner to his mother. Some days he stops at Aaron’s grave just to talk. Then he heads home.

Alone at home, New Edition’s “Can You Stand the Rain” played softly from his stereo. The music flowed through the 5-bedroom home in Compton.

Sunny days everybody loves them, tell me baby can you stand the rain?

On Thursday, he was reclining on the couch and mulling over his testimony from earlier in the week. Did he say what he wanted to say? Was there something he missed?

The quiet moments have grown longer since Aaron’s death. He still goes out with friends for happy hour and keeps himself busy with home improvement projects. But he has had many moments of solitude.

He made the funeral plans by himself. He waits by himself on most court days. No one called him to check on him after he testified.

“This is like a bus stop in my sons’ lives. They get to move on in whatever they can,” Shannon said. “For me, I’ll never be able to leave this spot.”

His home is full of memories of Aaron. A memorial for Aaron hangs over the counter in the kitchen, where Shannon talks to his grandson. "You are always welcome here," he says to his grandson’s photo daily.

The table behind the couch was where detectives took Shannon through photos of potential suspects two days after the shooting. It’s also the spot that holds one of his last memories of Aaron: the two of them silently eating rocky road ice cream out of the carton.

Shannon sat outside the courtroom for the rest of the trial. When it’s over, Shannon imagines the judge and the lawyers leaving. The jury will return to their daily lives. But the grandfather will remain with the memories. And the grief.

Noel Gladie,
Really, you are more worried about the life story of the birth mother and an uncle? This story isn't about them it is about that little boy who lost his life. Everyone else are just side notes/characters. Wow, I can't believe that you managed to make this about the adults in this child's life. Great job...at making the child a blurp in the story.

I see so many articles about Aron's dad grandpa and uncle but what about his mom Beverly who had to get the phone call and rush there with Aron's sister? What about his uncle Calvin who helped raise him and had to find out on tv cause he had been at work all day? Why does no one get their story?