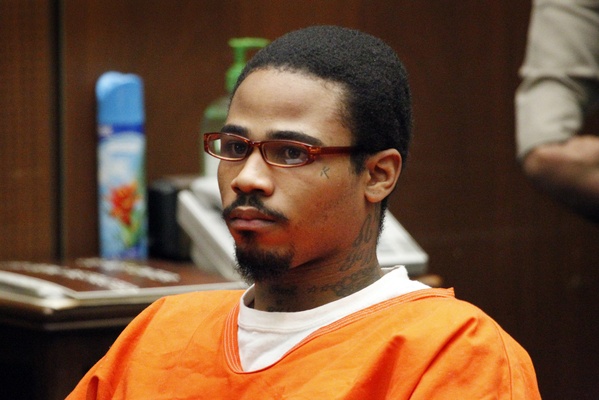 By Jerome Campbell and Matt Hamilton

A 24-year-old man was sentenced Thursday to more than 25 years in state prison for the Halloween killing of a 5-year-old boy who was dressed as Spider-Man, prosecutors said.

Marcus Denson had previously pleaded guilty to one count of voluntary manslaughter and two counts of attempted murder for the Oct. 31, 2010, slaying of Aaron Shannon Jr., according to the Los Angeles County district attorney’s office.

Denson’s sentencing in a downtown courtroom marked the end of another chapter in the tragic daytime killing in a South Los Angeles backyard.

Prosecutors said that Denson and another man, 26-year-old Leonard Hall Jr., had entered rival gang territory in the Florence neighborhood and came through the alley behind the young boy’s family’s home in the 1000 block of East 84th Street.

As they passed through about 2 p.m., Aaron was running into the backyard to show off his Spider-Man costume to relatives gathered at the home, prosecutors said.

A single gunshot struck the boy in the back of the head. Family members tried to revive the child, then he was taken to a hospital and died the next day.

“He was 5 years old and 3 months -- one thousand nine hundred and eleven days to be exact. That’s all he got,” Aaron’s grandfather, William Shannon, later said.

Aaron’s uncle and grandfather were also struck by gunfire but did not suffer serious injuries, prosecutors said. Denson, who was 18 years old at the time of the shooting, was arrested within days of Aaron’s death.

In 2013, he pleaded guilty as part of a deal with prosecutors. He later provided testimony in the three trials of Hall, telling jurors that Hall was the gunman.

Both men were members of the Kitchen Crips gang; Aaron’s family’s home was in a rival gang’s territory, but police and prosecutors said none of the victims had ties to any gang.

Juries in two of the trials were unable to reach a unanimous decision about Hall, but the third jury convicted him in May of one count of second-degree murder and two counts of attempted murder. He was sentenced to 128 years to life in state prison.

Before receiving his sentence, Denson spoke of the fateful day that cut short the life of the young boy, according to media reports.

“I was at the wrong place at the wrong time,” he said. “I have remorse in my heart. That’s why I came clean.”

Photo: Marcus Denson was sentenced Thursday to more than 25 years in state prison for the 2010 slaying of 5–year–old Aaron Shannon Jr., who was shot while showing off his Spider–Man costume. Credit: Al Seib / Los Angeles Times

He gets 128 yrs., 'accidentally" shooting the baby-boy, and 'accidentally' injuring two other Family members, he should have received manslaughter.

It occurs when someone kills, without intent, in the course of committing an unlawful act. The malice involved in the crime is transferred to the killing, resulting in a charge of manslaughter

Why so many years for this wayward gang member? The article doesn't mention if he had priors. The Cop in Ohio, that exited the cop car, and murdered that innocent 12 year-old. within 2 seconds, and then found innocent of murder..? The cop intended to shoot the 12-year-old, or he would not have murdered him, w/ in 2 seconds murder according to his superiors. Well, at least the DOJ is investing why he 'wasn't ' charged. And their investing the entire police dept.

The entire gang should have been charged, locked up and the key tossed away.

Time we treat these gangs for what the are- Terrorists.

He should of been given the death sentence .. take a life you give up you're life! There should be tougher laws for gang crimes!