Man convicted of murder in Halloween shooting of 5-year-old

After two deadlocked trials and days of jury deliberation in the Halloween killing of 5-year-old Aaron Shannon Jr., the child’s father was on edge.

But on Wednesday afternoon, as Aaron Shannon sat inside a downtown Los Angeles courtroom and listened to a jury give a verdict in the third trial in his son’s shooting death, reality seemed to melt away. 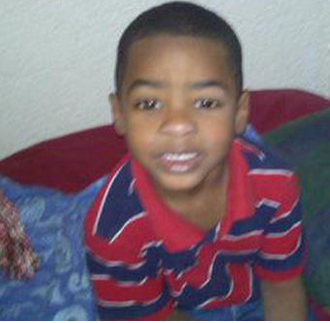 Shannon said he felt an overwhelming sense of relief. He knew exactly where he was going next. He drove to Inglewood Park Cemetery to visit his son’s grave and tell him what had happened.

“I’m just overwhelmed that justice has been served,” Shannon said Wednesday afternoon.  “Now I feel like we can finally bring this event to a close.”

Aaron Jr. was a giddy 5-year-old in a Spider-Man costume on Halloween in 2010, playing in his yard on 84th Street in Florence with his family. Hall and a fellow gang member walked through a nearby alley, and Hall opened fire.

Three people were struck, including the boy’s grandfather and uncle. Aaron was hit in the head and died at a hospital the next day. The other man, Marcus Denson, 23, admitted a role in the attack and was sentenced to nearly 25 years in prison.

Two juries had previously deadlocked on charges for Hall, resulting in mistrials.

After his convictions, Hall now faces 90 years to life in prison when he is due back in court July 21 for a sentencing hearing.

“It’s been a long time coming,” said William Shannon, Aaron’s grandfather. “I knew this day would come. I was willing to keep waiting for justice, but I’m glad it came now.”

The jury deliberated for parts of four days. On Tuesday, there was some confusion about whether the jury was hung, but Superior Court Judge Robert Perry sent the jurors back to the jury room.

After about an hour Wednesday, they had reached their decision. The prosecutor in the case declined to comment and the defense attorney did not return phone calls.

LAPD Det. Chris Barling, who helped investigate the shooting, said that help from the community aided detectives in making arrests. He thanked the jury for their service.

“The loss of Aaron Shannon Jr. is a void that we just can’t replace,” he said. “No matter what the justice outcome is, it never replaces that.”

And although the guilty verdict brings some closure for the child's grandfather, William Shannon, he’s unable to let go of the child he called “my little man.”

“Has justice been served?” he asked Wednesday. “I don’t know. I’ll have to ask my grandson when I see him.”

It's over now I feel like I can make the storm is over now!!! Thank you JESUS!!!

ALL lives should matter. It starts at home. If you can't feed 'em, don't breed 'em. The streets have enough lost ones.

— Guero David ; You have posted as weird a comment as I have ever read in this blog.

But glad they nailed this barbarian.

Black lives matter. Even when white police officers are not involved in the equation. Rest in paradise, Lil Aaron. Your family loves and misses you. And justice has come to the bad guy who stole your life away.